Difference between revisions of "Icesus:About"

The world of Icesus is set upon the planet Aegic, a planet created long ago by a clash of the elemental planes. As a result of battles between the elemental Gods, the planet was recently covered completely in ice, except for the valley of Icesus. Having recovered from the shock and starting to rebuild cities and nations, the races of Icesus have already had one major war. 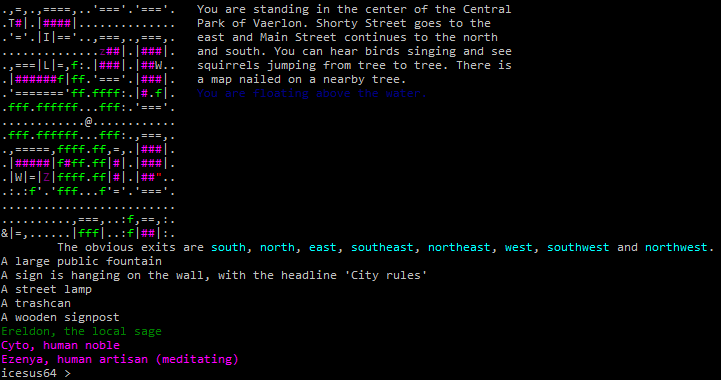 Icesus is a very original LPMUD set in a seamless fantasy theme, and a vast world full of secrets to explore. Apart from the original realistic combat system and an innovative spell system, Icesus also has a variety of interesting features sure to distract you from mindless expmaking. The overall feeling and mood of the world will hold you in its grip like an icy cold hand of a wraith. Run on a dedicated server/connection by an equally dedicated staff, Icesus is truly a refreshing exception in the general MUD genre.

I guess most people have watched the famous british comedy show, The Fast Show. However, not many know that Paul Whitehouse, one of the creators and actors in the series, also played Icesus in his spare time! Yes, it's true. And he liked the game so much, he planned to do an Icesus Special Episode for the Fast Show. This idea was eventually discarded as not too many would have understood that episode. Luckily, the manuscript to that show wasn't deleted. So here it is: the manuscript for: The Fast Show - The Icesus Special Episode!