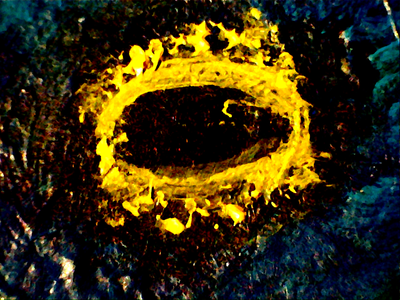 The valley of Icesus is all that remains of the once beautiful planet called Aegic. It is a huge valley surrounded by a mountain range, and a shimmering forcefield above it. This is the last place where life remains, the rest of the planet is covered in solid ice. It is a vast, cruel and barren country, where a merciless and almost endless winter arrives each year, drowning life in the thick snow cover. But as the snow recedes, it becomes beautiful and passionate and life is reborn to enjoy the glory of a short summer.

The Icesus valley is the frontier between civilisation and wilderness. It is the clash between the church of elemental gods and the pagans. It is the great divide between light and dark. And it is becoming a battle field.

The southern, more fertile part of the valley is dominated by the glorious kingdom of Valkor and their stupendous, fierce horsemen. They annexed most of the region into their kingdom about two generations ago, and now control large estates of land from their capital city of Vaerlon. The valley is also home to numerous sects of the ascetic doctrine of Church of Elements, many of whom care for the sick and the poor. If khatuns of Valkor rule for everyone, and these religious sects preach for everyone, it is the common people who labor in the fields, the cities and the villages. They work for everyone, and hold on their shoulders both the khatuns and the priests of these elemental sects. All put together, these peoples (horsemen, khatuns, priests, serfs) are called the Children of Light, because they live in the light of their Elemental Gods.

The iron fist of Valkor has proven to be a terrible and effective weapon for defeating rebellion, and the people would not even dream of rising up against them.

The northern part of the valley is populated by three main pagan groups who live in the wild and untamed arctic wilderness - the Eskarans, the Gaesati and the Goblins.

The strongest of the pagan groups is the Eskarans. These people previously settled in the northern forests of the valley and were displaced by the incoming Valkors. Today they continue an endless guerrilla war against the usurpers. Like their ancestors, the Eskaran place their faith in the dark mistresses of the gloomy wilders and warlocks of the northern forests, offering them victims in exchange for their witchcraft. For generations the Eskarans have been waiting for their opportunity to claim the lands of their birthright, and their seers are now telling us that the time for change is at hand.

The Gaesati are the original inhabitants of the Icesus valley, they were pushed north as the ancestral mothers of the Eskaran kingdom moved in to take possession of their hunting and fishing lands. Today the Gaesati make their home in the extreme north, a harsh and often treeless country. They are a nomadic people, herding reindeer for food and hides. They trust their lives to the hands of spirits and sacred locations, this grants them the means to survive in a valley where, in the chilling conditions and innumerable supernatural dangers, no one else could survive. They are a peace-loving people (they did not take up guerilla warfare against their conquerors) but their spiritual discipline threatens to draw them into the politics of the valley.

The Goblin peoples are the least numerous pagan group of the valley, they include trolls, ogres, orcs, goblins and kobolds. Previously they lived in deep caves of the darkest forests at the edges of the valley, where they tried to avoid contact with the human people (humans, elves, dwarves) who would hunt them for sport. Recently, the settlers of the Children of Light have begun to fell these forests, and they are now pushing the Goblins away from the valley. As of today’s date, the Valkor expansion has pushed at least two-thirds of the Goblin people from their homes. About one half of the dislocated Goblins have joined the dark elf czardom of Graemor and they now live in that desolate city. The other half have formed various ruthless paramilitary kingdom-clans driven by orcs, where they live in even more cramped living conditions. It may only be a matter of time before the frustration and rage of these angry creatures will overflow on all fronts.

The Kingdom of Valkor is currently in crisis. Its expansion has come to an end, and alarming rumors of civil war between the mighty khatuns are raging in the East. Elves and dwarves have not yet accepted that the kingdom is falling apart, though this seems inevitable. At the same time, the pressure from the valley to the south has increased alarmingly, with increased looting and stories of witches and warlocks traveling openly in the daylight. Wilders, a scourge which was believed to have been defeated, are on the move again, and in some places the people are ready to reject the doctrine of the Church of Elements to restore old habits.

Welcome to the worldbook of Icesus. The purpose of these pages is to introduce you to the history, lore, stories and description of the world. If you are looking for game mechanics related information and instructions, go see our Player's Handbook.

If you want to read the complete history, it is available here.

Icesus is all that remains of the beautiful planet called Aegic. A huge valley surrounded by a mountain range, and shimmering forcefield above it. This is the last place where life can remains. The rest of the planet is covered with ice. Ice - the word hardly describes what we're dealing with.

Long ago, so long that even elves have trouble remembering it, a war was waged between god of Water and goddess of Fire. The god of Water was victorious, and the goddess of Fire fled from the realm, its ally, the god of Magic was totally destroyed in the conflict. With the element of fire weakened, the planet itself began to freeze.

The 'season of sleeping' lasted much longer in the following days, almost half a year at first, but it kept growing longer. The other seasons were getting colder and shorter as well. Snow hid the earth from the eyes of mortals, and the only place where you could still see ground at all, without having to call upon a priest of fire, were old elven forests. In fact, it was so cold that many animals overcame their fear of fire, and made their way to campfires, just to keep warm. For once hunters could just sit at their camp and pick any animal that wandered in to bring home. Some races even managed to tame animals, like wolves, which were previously all but impossible to tame.

Despite the fact that people had good supply of fresh meat (having the whole outworld as a meat locker was convenient) there was one major problem; Beer. Grain didn't adjust to the long winters, it wasn't able to cope. Earth priests (previously Aegic's supreme farmers) tried everything, but it was all in vain. That is probably when they gave up on farming and started looking for new ways to use the power of earth. Many people lost all hope of this winter ever ending and began moving towards the equator. It was still warm there, although, like the rest of the planet, it was colder than usual.

The sun shined down and shared its warmth, filling people's hearts with hope. It was false hope, as it turned out. Scouts, that were sent yearly to check the situation in abandoned lands reported that winter kept advancing, and far to the north and south one could see strange mountains that appeared to be made of ice. They were quite a sight, especially at the dawn, but they appeared to be growing towards each other, leaving people less and less space to live on.

The priests predicted that within a few decades glacier would cover the whole planet, but even before that, it would become too cold for the currently survivng races to live. People turned their eyes towards the priests, hoping that they would find some solution to save them. The priests of all elements and races put their differences aside to save the people who believed in them, and after a while, priests of Fire (although these days, everyone claims that it was priest of the element they follow, that was the father of idea) came up with a plan to stop the ice. With the help of earth priests they conjured the high mountain range that surrounds Icesus, and when the ice came, it stopped advancing. Mountains didn't stop cold though, so to keep everyone and everything warm, three great volcanoes were created and a forcefield erected, to keep the warmth in and the cold out.

Born of the Kingdoms

Time passed and everything began to return to normal. Monsters, which had previously lived there, were killed or banished to the cold areas near the mountains. Cities were built, and of course a war was waged between Elves and Dark Elves. At times, its a bit crowded here in Icesus you see, since survivors from all over Aegic had moved here, and the Elves (the original owners) were quite unhappy with having to share a valley with their mortal enemies, the Dark Elves. Needless to say, the Dark Elves weren't too happy either. As creatures with long lifespan however, they didn't really want to die, as each death was considered 'a horrible loss to the universe', so in the end it was really just the Humans fighting the Orcs. The Humans won and demanded the prize that was promised to them - power, but the Elves and the Dwarves weren't eager to share. After the war most of the Dark Elves were banished, kept outside the newborn kingdom of Valkor, the Orcs on the other hand were allowed to live in Vaerlon, the capital of Valkor with some restrictions. Although, some of the more 'established' citizens weren't too happy with this arrangement. To keep things under control, the council didn't put an end to martial law, using rumors about Human Rebellion to keep the population under control.

So here we are now, Elves and Dwarves, with their constant bickering and infighting, inside Vaerlon to the west. Dark Elves with their plans for revenge, in the city of Graemor to the northeast. Atherton to the north, with all kinds of friendly, but independant, folks and Teladan in the middle of the valley, surrounded by the integral farms that feed everyone. Things seem peaceful for now; people enjoy everything from fishing and swimming, to studying the art of magic that was, at first, considered lost, when the god of Magic died. All seems well for the average people, but there's something in the air, something that makes the rulers of the new kingdoms gather armies, something that drives merchants to hire guards and raise prices. I fear the horrors of Ice will soon be forgotten, as something even more horrible descends upon the valley...

This category has the following 3 subcategories, out of 3 total.